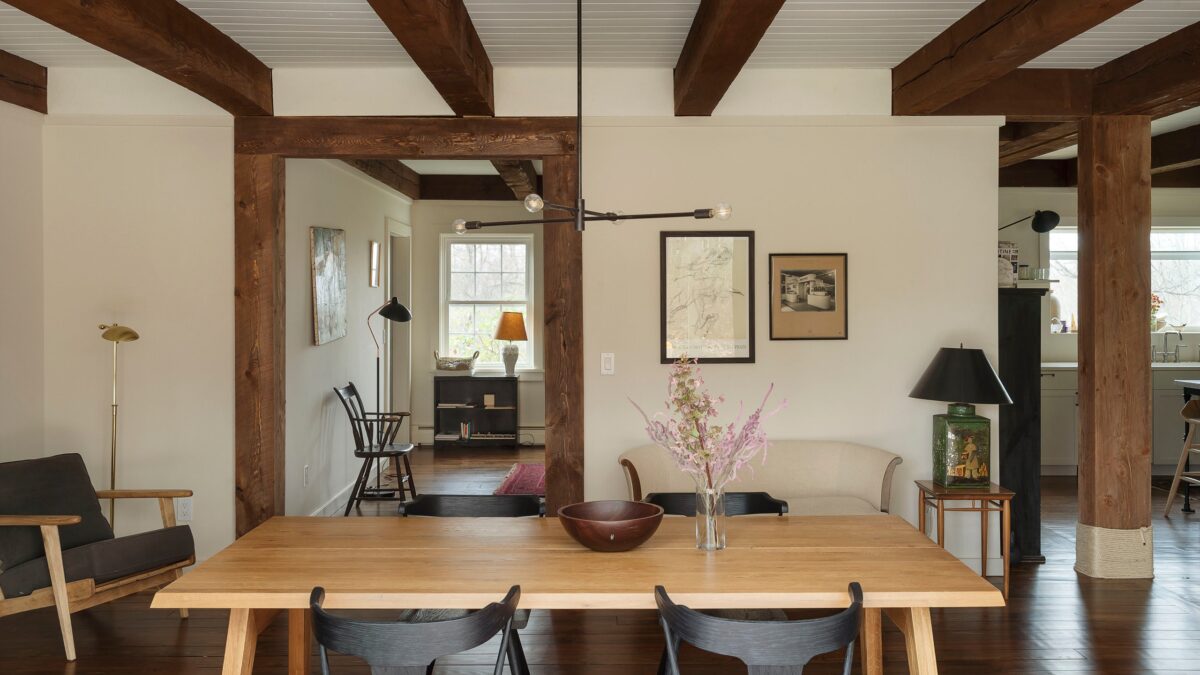 Located about a 10-minute drive to the center of Hudson, New York—a destination of choice for New York creative minds looking for a little more space and a slower pace of life—this 1977 country home is a classic post-and-beam construction, which was recently renovated by General Assembly for a couple in the film industry and their child.

“We had worked with General Assembly on a previous renovation and the result was just gorgeous,” say the owners, who split their time between Brooklyn, London, and Hudson, where they chose to have this vacation home. “The house was built in the 1970s, so it doesn’t have the inherent charm of an old country farmhouse. We thought adding General Assembly’s modern touch could create something really singular—a fresh combination of ideas and eras.”

Spread over 4,000 square feet and split into two floors, the four-bedroom, three-and-a-half-bathroom house took a little over a year to complete. “When we bought it, the house was in great shape, but design-wise it needed a lot of love,” the owners remember via email. “We did two rounds of renovation on it, and by the time we finished we’d touched pretty much every room.”

On the main level, the interior rooms were opened up to visually connect the gathering spaces and to make the central fireplace more of a focal point, while on the second level, two rooms were combined to create the primary suite with the sleeping area on one side and the freestanding tub and dressing room on the other.

“The biggest challenge was to modernize the house with new plumbing and electrical without having to spoil the exposed timber ceilings,” confess Sarah Zames and Colin Stief of General Assembly via email. Both of them were immediately drawn to this architectural element, and it directed most of their decisions in terms of materials and color palette.

“In order to emphasize the construction, we created contrast with the walls between the dark flooring and the heavy ceiling. The kitchen, for example, was meant to be as neutral as possible to highlight the texture of the two dark planes above and below,” Sarah and Colin say. “With the new semi-open floor plan, we also used a few colored walls to delineate certain rooms and break from our rule of highlighting the wood floor and ceiling. For example, we chose Farrow & Ball’s Green Smoke in the main bathroom to create an elegant and soothing space to take a bath and meditate while gazing at the outside landscape. In the study, however, we used Benjamin Moore’s Van Deusen Blue, a stimulating hue, which opens up the room and inspires creativity and dynamism.”

The renovated spaces feature many vintage treasures, which were sourced by the owners from nearby galleries. “We are always excited when a client is involved in the finishing of a project as it brings an added layer of personality and memory to the space,” Sarah and Colin say. “The wife is English, and we are not sure if it was a conscious decision or not, but there are definitely some elements that recall the refinement and timelessness of English country homes.”

With its glossy finish and ’70s feel, the white piano, which previously belonged to the wife’s mother, is one of the key pieces in the house. “Accordingly, we call the room that it is located in the music room, and it has a real studio feeling to it—like a workshop that is both practical for working on projects, but also nice for welcoming guests in and entertaining,” Sarah adds.

In the guest bedroom, the original floral wallpaper is the only finish that General Assembly salvaged. “We are always interested in trying to keep a little bit of the history of a space, and we felt this wallpaper gave us a little glimpse into the lives of the previous owners and the life of the home,” the designers say. “The owners really leaned into the space, decorating it with more patterns on top of the wallpaper, proving that sometimes more is more!”